I like you, see hundreds of advertisements everyday, and thousands every week.

And if you’re anything like me, most of them go un-noticed at best, or are annoying at worst.

But some of them get my attention.

As a marketer and copywriter, sometimes I like to break the copy down for study. (Especially the ads I see over and over again, because that usually means it’s making money for the advertiser).

Anyway, I thought I’d share the process with you guys today.


Here’s a direct mail piece I recently got from Geico. This is the first time I’ve gotten this particular piece, so I don’t know if it’s working for them or not. But it’s still got some good elements (and a few that could be improved)… 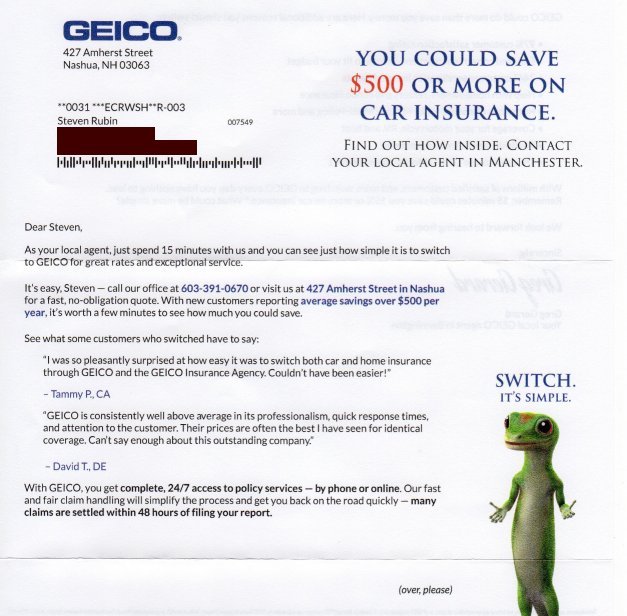 Now let’s break it down…

This letter was folded in thirds and stuffed in a #10 full window envelope. And the first picture below is what showed through the window.

Aside from my name and address, you can also see the teaser copy.

Anyone looking to save a few bucks on their car insurance, is likely to at least open the envelope and check out the offer.

And as we all know, just getting our target market to read our offer is 80% of the challenge with any direct response.


Now let’s take a look at the body copy… 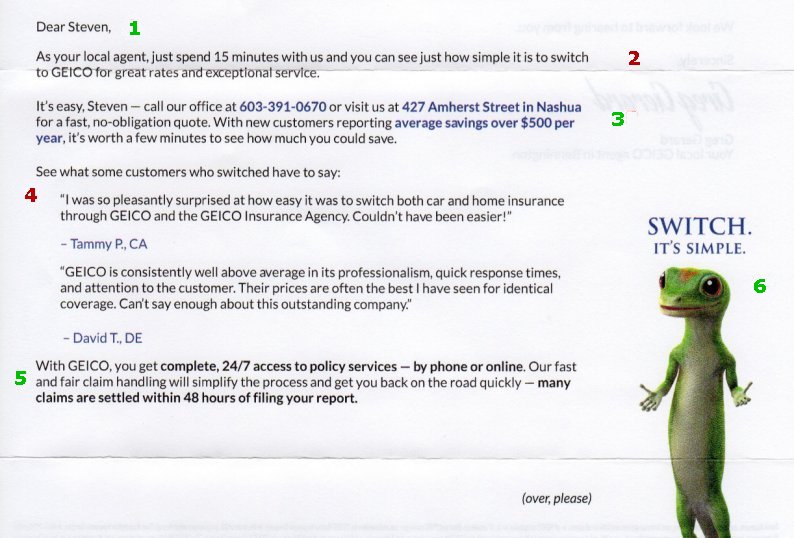 1. They address me by my name, instead of just using “customer” or “resident”. This helps build rapport in 2 ways…

It feels a bit more personalized.
It shows they at least took the time to find out my name.

It doesn’t necessarily make me feel special, but at least they still have my attention for now.

2. This opening sentence was a speed bump for me, so I had to give it a red mark.

“As your local agent, just spend 15 minutes with us and you can see how simple it is to switch”

Is he the local agent? Or am I?

I understand he’s trying to build rapport by letting me know he’s a local guy. And I’m not a grammar nazi by any means. But that sentence made me think twice, and that’s one time too many.

If he had changed the syntax, or simply left out the “As your local agent” part, it would have been a solid green mark. (green = good)

3. This next part gets the flow moving again, starting with “It’s easy, Steven”

Easy is good. And using my name again keeps the familiarity going. (NOTE: Using a persons name a couple times can build rapport, but don’t overdo it or it starts to sound patronizing and it can break rapport)

This section also throws in a few common trigger words like “fast. no obligation. savings”.

Personally, I would have left out the office address and just used the phone number as a contact point. Because getting in my car, and driving to their office for a quote, is not “fast” or “easy”.

4. This next part was a bit tricky to grade, because technically, using testimonials is a solid proof element in our copy. But at first glance these testimonials look fake to me.

The first one uses the term “GEICO and the GEICO Insurance Agency” in the same sentence. And my first thought was “who talks like that in real life?”

Most people would use one, or the other, in a short testimonial. Someone being paid by Geico would write it the way it’s written here.

And if a person was actually so detailed with their language, that they would use it the way it’s written here, why would they shorthand the grammar on the very next sentence? It’s too inconsistent.

Maybe it’s a legit testimonial, but it sounds phony and I don’t buy it.

The second testimonial is better, but it carries the skeptical question mark left behind from the first one.

5. Part 5 gets the green light because it’s a solid copywriting technique reminding us they have a fast, fair, and simple claims process. And “bolding” some of the highlights helps them stand out a bit.

6. Good branding opportunity. Geico spent hundreds of millions of dollars on advertising, to make sure we all recognize their mascot. So putting that familiar lizard in every ad they send out is a good use of the real estate on the page.

Finally, let’s take a look at the back side of the letter… 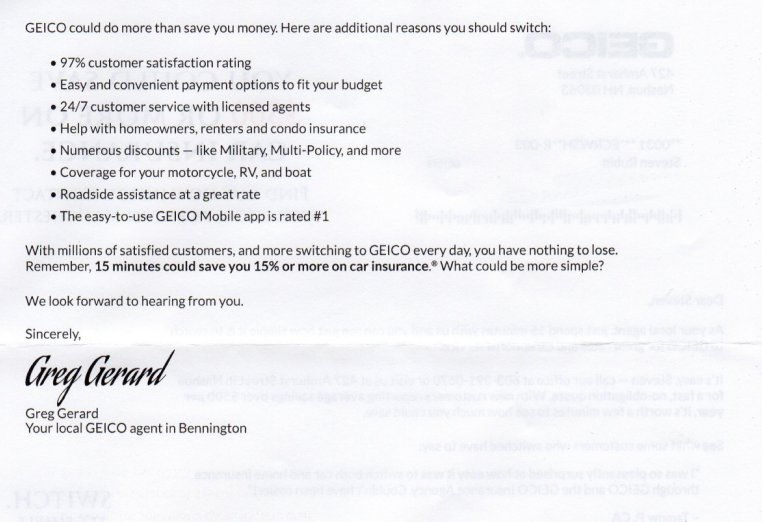 They use bullet points, which is good. But I personally would have used them for benefits instead of just a list of features.

Also, I could do without the poor attempt at rhetoric in the second to last sentence. The one that says …

“with millions of satisfied customers, and more switching to GEICO every day, you have nothing to lose”.

How does Geico having customers equate to me having nothing to lose?

It comes across as cheesy manipulation copy, and it hurts the credibility more than it helps.

Overall I give the letter a solid grade of “B-” because it’s built on solid copywriting techniques. But as it stands right now I can’t give it an “A”. I’m convinced if they make a few small improvements it will get a better response rate.

Unfortunately, I don’t know anyone who works for the Geico marketing department, so I’ll probably never get to see the actual response rates from this direct mail piece.

But if I see it show up in my mailbox a few more times in the coming weeks, I’ll assume it’s working. And if it’s working, then I’d change the grade to an “A” because results are all that really matter in the world of direct response advertising.


Anyway, I hope you enjoyed looking over my shoulder as much as I enjoyed having you here.

And if you have any of your own comments about this direct mail piece, feel free to chime in…
A good marketer knows how to think like a marketer - A great marketer learns how to think like the customer...
SARubin - Direct Response Copywriter / Conversion Flow Specialist
Top

Thanks for this post @SARubin. It’s a good exercise.
One other thing I noticed is the envelope copy says contact your local agent in Manchester, but the office address in number three says 427 Amherst street in Nashua.

I don’t know your town, but is Nashua a subdivision of Manchester or are they 2 different cities?
Choose your words wisely because what you say is not always what the other person hears
Top

You’re correct, they are 2 different cities. Sometimes it’s little details like that, that can make or break the copy.
A good marketer knows how to think like a marketer - A great marketer learns how to think like the customer...
SARubin - Direct Response Copywriter / Conversion Flow Specialist
Top
Post Reply
3 posts • Page 1 of 1