OK, so a couple of weeks ago I analyzed a Geico direct mail piece on this forum.

If you recall I gave the mailer a grade of ” B-” because it was built around solid copywriting techniques, but it came across as a bit manipulative and insincere.

And the fact that they completely rewrote the piece (as seen below) tells me that the first one didn’t get much response (or they’d still be using it).

So perhaps my B- grade was a bit too generous?


Anyway, here’s the front side of the new one they just sent me… 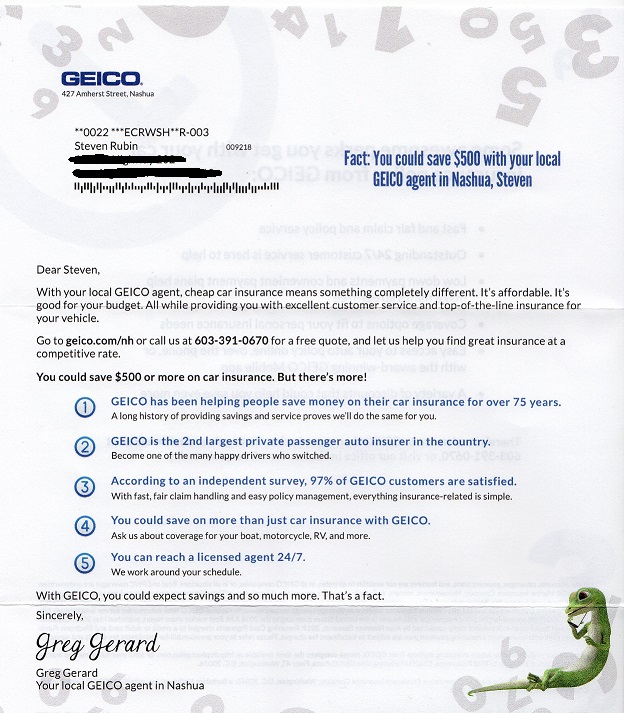 Personally I think the body copy is much better in this one, over the last one they sent.

This copy is just a straight forward offer.

Bullet points that simply tell me who they are, and why I should choose them (although like the last letter they sent, I would still recommend turning some of those features into benefits)

And they still included their little “Brand Recognition” mascot. (the lizard in the corner, that Geico spent hundreds of millions of dollars on, making sure we all recognize him as the Geico-Gecko)


Based on this copy, if I was in the market for car insurance I would at least be willing to consider this company. And coming from a skeptical guy like me, that’s a huge compliment.

Now for the negative…

I don’t love the envelope teaser copy as much as the last one. (the headline copy to the right of my name and address, that showed through the full-window #10 envelope)

They tell me it’s a “fact” that something “could” happen?

Maybe I’m just too picky, but to me that headline comes across as rhetorical bullshit!
And if I can name it, then I’m sure others can (subconsciously, or knowingly) feel it too.

Of course something could happen. Anything in this world “could” happen. But just saying it’s a “fact” doesn’t add to anyone’s credibility. Especially in this era of fake media stories, and skeptical or jaded consumers.

That intro copy is not a deal beaker all by itself, but I have to believe it’s going to harm their open rates more than it helps.


The other thing that bugs me is… What the hell is up with all those random numbers floating around the top and bottom of the page?

I’m guessing that was somebody’s idea of a clever design element?

Quite frankly, it’s a little distracting. As I try to figure out why those numbers are there, and what they mean, it takes my focus away from the main message.

Again, it might not be a deal breaker all by itself, but it doesn’t add anything to the sale. 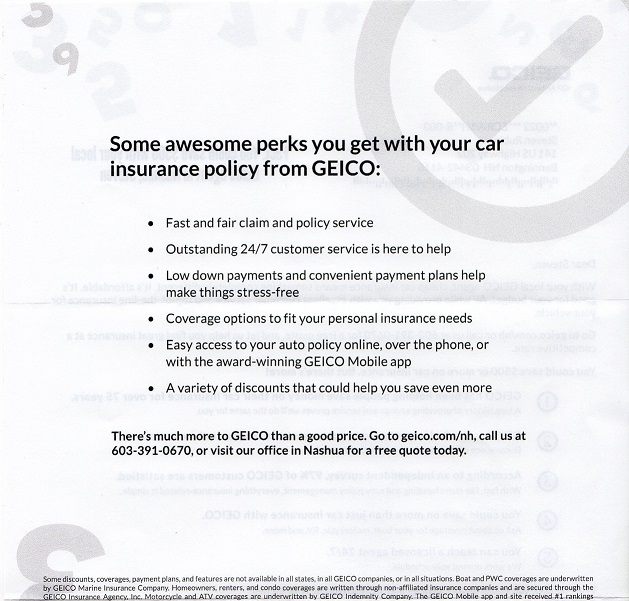 Here we see a small list of bullet points that offer me some reasons to call, followed by a nice tight call to action.

Nothing fancy here, but hey, we’re talking about car insurance (how exciting can it really be?).

At this point the copywriter knows… Just tell people what you can do for them, and let them know how to get in touch with you. If they’re interested they’ll call you.

The only thing I would add is a touch of scarcity (special expiring discounts, or something else to create a sense of urgency) to get people to act sooner, rather than later.


If I was grading this letter, overall I would give it a solid B+

Change the envelope teaser copy, and get rid of those random, floating numbers on the face of the page, and I’d give it an “A-“.


Anyway, that’s my breakdown of this letter.

Of course, like I always say, my opinion means little compared to the actual response numbers they get from the piece.

If I see this same letter show up in my mail a few more times, I’ll assume it’s doing fine.

And if I get a completely new version next month, then I might just call this guy and offer him some assistance (for a small fee of course